ou might hear people refer to ‘Mange’ if their pet is affected or they know an animal who has ‘Mange’. But what does it mean? Can you catch it? Can your pet? ‘Mange’ is a term used to describe a skin condition caused by sarcoptic or demodectic mites. Mites are external parasites that can be normal residents of your pets skin and hair follicles however they can cause mild to severe skin conditions if they grow in number.

“Demodectic mange mites, Demodex canis, are transferred from mothers to their pups when suckling in their first week of life.” 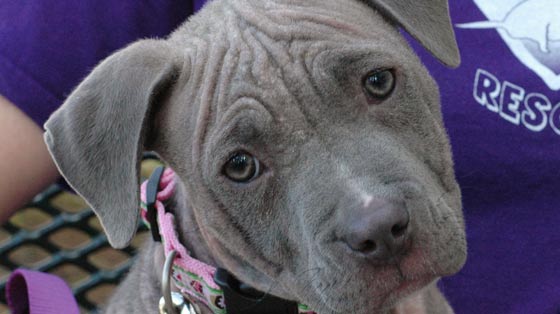 What causes Mange in dogs?

Sarcoptic mange, also know as scabies, is caused by Sarcoptes scabei which is an oval shaped, light- coloured tiny mite. It may be transferred easily between hosts (dogs, humans, foxes, some marsupials e.g. wombats).

Demodectic mange mites, Demodex canis, are transferred from mothers to their pups when suckling in their first week of life. Nearly all pups will possess a small number of mites that lead to no clinical signs or skin disease.

However, occasionally, in pups under 6 months of age who have an immature immune system the mites may proliferate (reproduce) rapidly and lead to the skin condition mange. In localised mange a few small areas on the face or legs become scaly and bald often in circular lesions and give a polka-dot appearance. This form of mange should resolve itself when the dog matures and should not require treatment.

A more serious form of mange occurs in animals who are have an underlying condition including an immune-compromising, hereditary condition or endocrine disease. The skin disease is expressed as large areas of baldness and scabbiness over the entire body. Secondary infections may develop as well which makes the skin itchy and often smelly.

Demodex mites have not been shown to be transmitted to cats and they cannot be transmitted to humans. Demodex species are host-adapted mites of mammals and each species of demodex is specific to one species of host. Humans can be infected by Demodex folliculorum.
They can be transferred between dogs however it is thought that if the recipient dog
is otherwise healthy then the mites will remain in small numbers and cause no skin
disease or clinical symptoms. Direct contact is required for transmission (ie usually between mother and pups) and mites cannot live off the host (such as in bedding)

Sarcoptic mange is highly contagious and in Australia can be caught from other dogs, foxes and wombats. They can be spread to humans and causes a rash of red bumps. Transmission is via direct contact between the host and recipient. 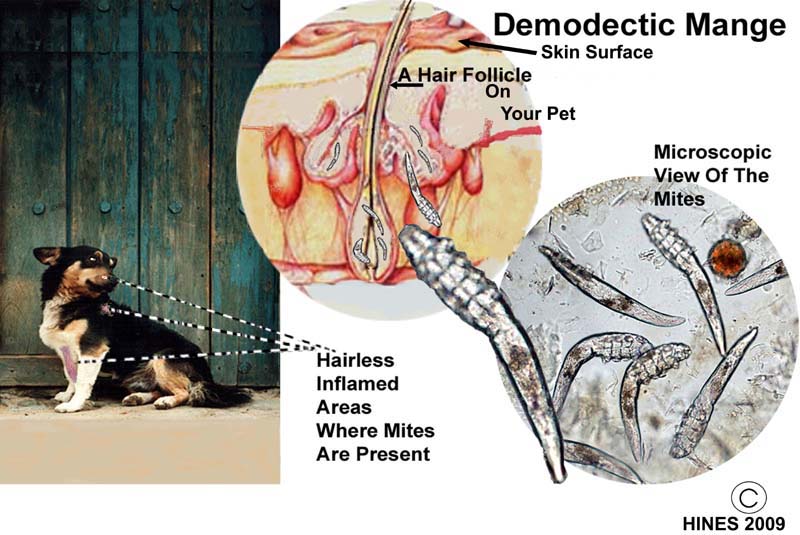 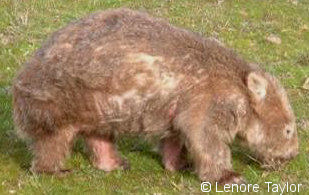 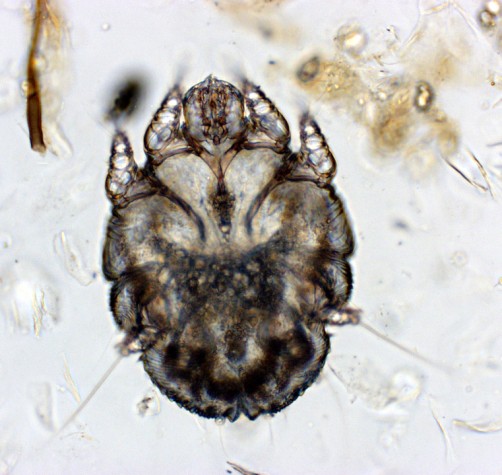 Sarcoptic mange is typically very itchy and causes a dog to constantly scratch. It is usually seen on dogs’ ears, elbows, faces and legs but may spread elsewhere. It may result in hair loss, sores, scabs and restlessness from scratching.

Demodectic mange causes hair loss, bald spots, crusty scabs and sores and often a moist greasy appearance. Sometimes a secondary bacterial infection occurs which causes the skin to become itchy and uncomfortable for the dog. Hair loss usually begins around the muzzle or face but in generalised cases will develop further on the face then along the neck, abdomen, legs and feet.

What if my dog has these symptoms?

If your pet is showing symptoms of skin disease you should contact your vet for a health check. They will take into account your pet’s history and clinical exam and likely do some skin testing (including scraping and tape prep) to try to find a diagnosis or cause of the skin condition. If demodex or sarcoptes mites are found or suspected your vet will dispense appropriate treatment. As mentioned earlier some skin conditions are a result of other underlying disease and this may need to be investigated. In other cases of young animals with mild skin conditions treatment may not be required. As the dogs immune system doesn’t mature until 12-18 months of age a dog with demodectic mange may have relapses until that age but should respond quickly to treatment.